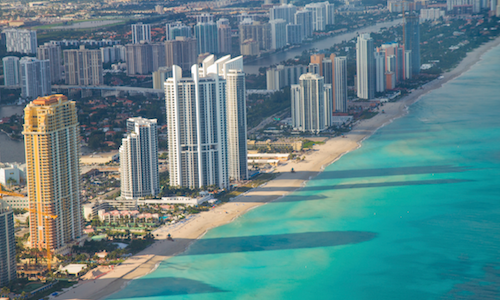 The middle of the summer has brought signs that the hot U.S. housing market is leveling off as sales slow and listing prices are cut. Those trends have fueled fears of a broader contraction and the coming of a buyer’s market. But trends within Miami’s condo market demonstrate why a buyer’s market is still a welcome one for agents.

The Miami Association of Realtors reported that condo sales in the metro area grew 8.2 percent year-over-year in July, making it the fifth of the last seven months to see a sales increase. While condo prices also grew 8 percent to a median of $243,000, high levels of inventory and relatively stable mortgage rates have helped fuel strong demand for Miami condos, with room for sales to continue growing.

While Miami Realtors found that entry- and mid-level price tiers fueled much of the growth in condo sales, more activity in the high end of the market helped push Miami’s condo sales volume 10 percent higher than last year, to $457.7 million. According to Lina Barcelo, director of luxury sales at The Keyes Company, this can be attributed to local market characteristics as well as the new federal tax law.

“I do see a lot of people coming in and looking at higher-price listings and making offers,” Barcelo said, who primarily deals with listings south of 5th in Miami Beach including the Continuum South Tower. “We weren’t seeing those big units sell before, but now we are.”

Barcelo explained that while she is used to seeing a large number of clients come from the northeastern U.S., when asked why they are moving, the most common answer is related to the new federal tax law. Among the law’s changes was a new limit of $10,000 per year on the total value of all state and local tax (SALT) deductions that taxpayers may claim. That has led to an influx of buyers from states in the Northeast, where SALTs tend to be higher than in Florida.

“Because of the new tax law, more buyers are planning to make Miami their primary home,” Barcelo said. One recent buyer told Barcelo that they couldn’t even move into their condo for another two years and would need to rent it out until then. The new tax law and Miami’s favorable market conditions prompted them to act now rather than wait.

Although strong condo sales made July a good month overall for Miami agents, single-family home sales fell flat or ended lower on the year in the area. Miami’s single-family home sales fell by 1.2 percent in July, echoing a national trend. However, Barcelo said that in her experience in the Miami market, this is part of a normal cyclical pattern, not to mention a testament to the appeal of condo properties.

“In Miami, condos are like a home,” Barcelo said. “They are near the beach, they have more amenities and there is less maintenance involved. But single-family homes can still increase; Miami always has a period when sales catch up.”