Amidst one of the worst economic recessions in American history, a recent telephone poll conducted by the Pew Research Center shows that the majority of Americans still place a great deal of value in their homes. 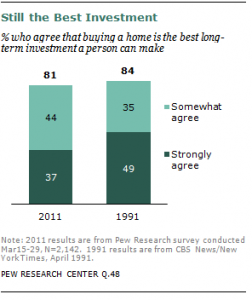 The survey of 2,142 adults, conducted by Pew from March 15 to March 29, shows that 81 percent of Americans believe “buying a home is the best long-term investment a person can make.” The report says that 37 percent of respondents “strongly agree” with the above statement, while 44 percent “somewhat agree.”

Despite the generally positive response, a great number of Americans have been negatively effected by the housing slump.

The poll reports that of 1,222 homeowners questioned, 47 percent said their home has lost value since the recession’s start. Thirty-one percent of respondents say their home’s value has stayed the same while just 17 percent report an increase in value.

Looking at respondents who say their home has decreased in value, 86 percent estimate it wall take more than years to reach its pre-recession value, while 42 percent say it will take at least six years and 10 percent expect no less than a decade before values recover.