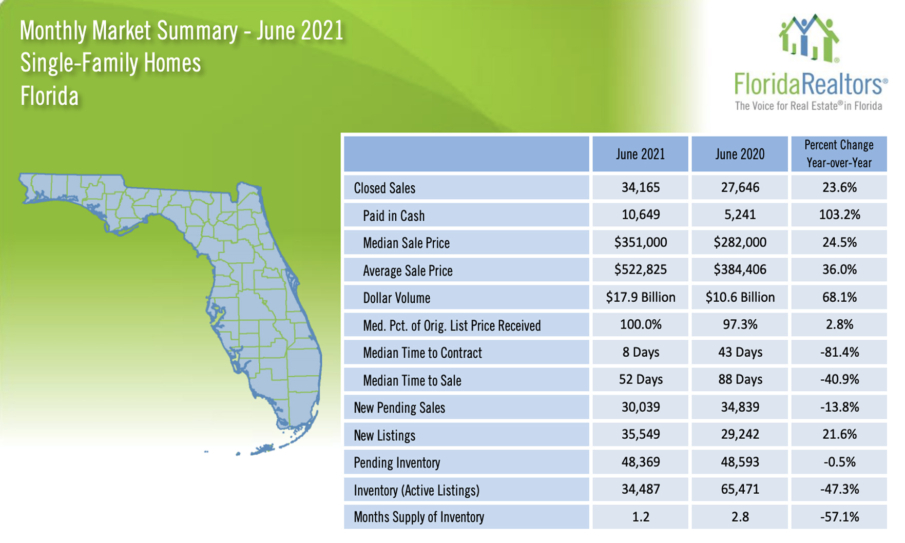 “Coming out of a record spring homebuying season, the state’s housing market continued its strong gains in June,” said 2021 Florida Realtors President Cheryl Lambert, broker-owner with Only Way Realty Citrus in Inverness, in a press release. “Of course, the impact of the pandemic last June is still a factor to consider when looking at the comparison data. In a positive sign, new listings for single-family existing homes in June rose 21.6% year-over-year, while new listings for condos-townhouse properties increased 10%. However, while Florida Realtors’ data shows that new listings have remained at fairly typical numbers even throughout most of the pandemic, it hasn’t been at the levels needed to keep up with greater buyer demand.”

The statewide median sales price for single-family existing homes in June was $351,000, up 24.5% from the previous year, according to data from Florida Realtors Research Department in partnership with local Realtor boards/associations. Last month’s statewide median price for condo-townhouse units was $256,945, up 22.4% over the year-ago figure. The median is the midpoint; half the homes sold for more, half for less.

Florida Realtors Chief Economist Brad O’Connor pointed out that recent data trends indicate the ratio of buyers to sellers may finally be easing a bit. As a result, “Florida’s red-hot rate of home price growth could begin to cool down somewhat in the coming months, although that will also depend on whether interest rates start to trend higher again, as well. For now, though, the numbers continue to astound,” he said.

Another trend to consider, O’Connor added, is that over the past few months, the share of closed sales that are all-cash purchases has been on the rise compared to recent norms.

“Over in the single-family category, 31% of closed sales were all-cash this June, compared to 19% a year ago and 22.4% in 2019,” he said. “The last time Florida had more than 31% single-family cash sales in June was in 2015, when the state was still working the last foreclosures from the Great Recession out of the system.”

According to O’Connor, the current rise in cash sales as a percentage of closed sales is tied to two factors, with the first being a bit of a technicality.

“This year, higher-end sales have made up a greater share of closings than in previous years, and those types of sales are historically much more likely to be all-cash sales, said O’Connor. “About 56% of single-family sales over a million dollars in June were all cash. That’s actually not much different than last June’s share, which was about 55%. But since luxury sales are a greater share of overall sales this year, that’s pushing up the overall cash share.”

The other factor is a rise in the percentage of single-family home sales paid in cash in price tiers below $400,000, O’Connor said. “This indicates a rise in investor activity, so of course Florida Realtors will be watching these numbers closely,” he added. “The most prevalent price tier where this is occurring depends on the area’s market and its overall price level. The trend started emerging first in the state’s major population centers but has since expanded to a degree into small- and mid-sized markets, as well.”

On the supply side of the market, inventory (active listings) remained extremely tight in June. Single-family existing homes were at a very low 1.2-months’ supply while condo-townhouse inventory was at a 1.8-months’ supply.

According to Freddie Mac, the interest rate for a 30-year fixed-rate mortgage averaged 2.98% in June 2021, down from the 3.16% averaged during the same month a year earlier.

To see the full statewide housing activity reports, go to the Florida Realtors’ Newsroom and look under Latest Releases or download the June 2021 data report PDFs under Market Data on the site. 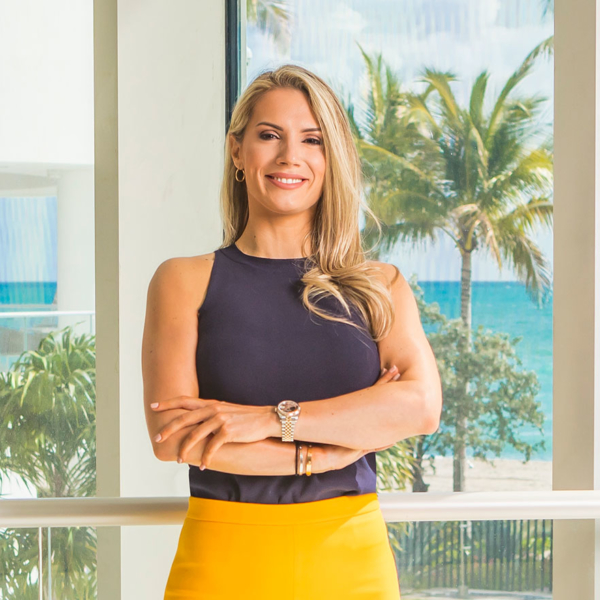