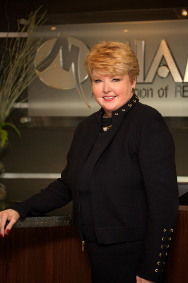 The William R. Magel Award of Excellence is presented annually to an individual who has excelled in his or her role as an association executive of a realtor association with an extensive record of participation, mentorship and contributions.

“It is such an honor and a privilege to receive this very special recognition and award from the largest trade association in the world,” Kinney said. “This continues to be my passion and the opportunity of a lifetime, to be able to work with and represent MIAMI Realtors, the largest local association in the U. S. and all our great communities in Miami and South Florida locally and worldwide.”

Kinney, who hails from St. Joseph, Missouri, has led the nation’s largest local realtor association for 26 years, playing an integral role in making Miami a top real estate market for both domestic and international investment.

When she began with MIAMI in August 1993, the board had just 5,000 members. Over the past 26 years, Kinney has led the association to unprecedented growth, with a total of 52,000 members in four counties (Miami-Dade, Broward, Palm Beach and Martin). She has also overseen a number of mergers, the first in 1997 when the association merged with the Miami Beach association, followed by two mergers in 2010 and another in 2015.

Kinney is also credited with helping MIAMI host more than 75 inbound trade missions from real estate delegations worldwide, promoting the South Florida market at more than 100 national and international conferences and expos, and a plethora of leadership and professional development seminars across the U.S., Latin America, Europe, and Asia.