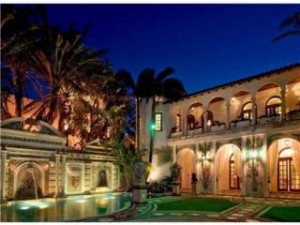 The Versace Mansion just hit the sales floor for an incredible $125 million.

The Casa Casuarina, the late Gianni Versace’s Miami Beach mansion, has been listed for $125 million, the highest listing price in the Miami area.

Listed by Jill Eber and Jill Hertzberg of The Jills, a Coldwell Banker team, the property is currently owned by telecom entrepreneur Peter Loftin, who purchased the property in 2000.

Other notable details of the home include:

Hertzberg said the property is of worldwide renown, and such a reputation will immediately reflect on the buyer.

“The Casa Casuarina is visually stunning, and is one of the most well known properties in the world,” Hertzberg said. “Right now, with the attention and action the high-end luxury real estate market in the Miami-area is receiving, it’s the perfect time to find the right buyer for this magnificent home. Whoever buys it will have instant celebrity.”