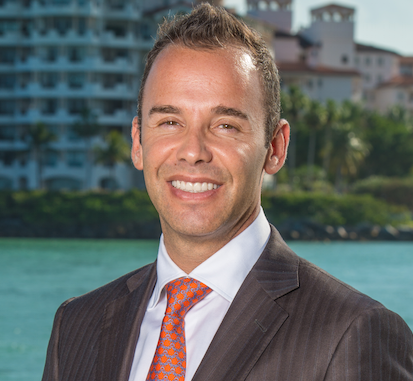 Jay Parker is the CEO of Douglas Elliman Florida

Miami Agent (MA): Earlier this year, the Treasury Department announced it would be increasing its scrutiny on the Miami market, specifically looking at cash sales over $1 million and requiring that buyers disclose who they are. What are some of the reasons an international buyer may hide their identity?

Jay Parker (JP): I think that the primary reason why an international buyer would seek to hide their identity is for protection in their home country. As you know, or as we know, in Latin America, high-net worth individuals in those countries face the risk of kidnapping, exploitation, et cetera, and I think that that’s the primary motivator behind protecting their identity. I think it’s probably also the case that some of those people have moved funds out of their home countries and, speculatively speaking, have probably not disclosed those funds to their home country. And so, by investing them in foreign real estate markets, they’re probably seeking to avoid that information getting to their home country. That’s probably the most unscrupulous of behaviors related to that. I think that ultimately the increased scrutiny is one of the most ineffective initiatives I’ve ever seen, because all you have to do is borrow a dollar and you no longer fall into that category. There are all kinds of ways to skirt the rule, and frankly, in addition to the lack of enforceability, it’s a terrible time to launch any initiative that would impact foreign investment in the United States. I’m not even quite sure why the U.S. cares.

MA: How are agents handling the increased scrutiny? Will it change the way they do business?

JP: No. Actually, I have heard nothing but sort of heckling about it. It’s a joke. The obligation falls on the title insurance companies, not on the Realtors. And I can tell you, having previously been one of the largest title insurance agents in south Florida, and having closed billions of dollars of deals with hundreds of thousands of foreign investors, I have never been aware of a situation where a purchase was a guise for money laundering or illegally obtained funds. It was always much more about security than anything else. And so if anything, the Treasury Department interfered with our ability to provide safe haven for flight capital. I don’t know where this legislation came from, but I think it’s really ineffective.

MA: Do agents have any responsibility to vet their overseas clients?

JP: Not from the perspective of complying with any Treasury regulations, or know-your-client regulations. We as real estate professionals are responsible for providing our clients with guidance and information relative to their desire to buy or sell real estate. We are not charged in any way, shape or form with vetting out the sources of those investors’ funds. So no, I don’t think we have a responsibility to vet clients, and I don’t think the increased scrutiny is going to change the way any of us are doing business. And again, I think that it’s probably a foolish initiative that will carry very little benefit going forward. If anything, it has provided a new layer of negativity as it relates to Dade County and the very significant impact of foreign investment in the market.

MA: Do you think Miami’s condo market is overbuilt?

JP: No. The Miami condo market is extremely healthy. I think that the analysis conducted by unsophisticated analysts – and by that I mean, industry representatives that define themselves as experts without really having any professional training in analyzing the markets – tend to compare today’s market to last year’s market; and that is not the way that real estate should be evaluated. As a point of comparison, if you compared the financial activity in Brazil over the summer to last year’s or next year’s activity, you might say that Brazil is in a free-fall because this year they have the Olympics and next year they won’t. That’s obviously not an appropriate comparison. And so what we in the state of Florida have experienced over the last, let’s call it five to six years, has been exaggerated exuberance, wherein the distressed market has been capitalized upon by every major, sophisticated investment group domestically and internationally. Because of that, we’ve seen extraordinary volume, extraordinary increases in value, and what has happened now is after the tremendous growth the market has stabilized.

If you look at the 7,000 to 8,000 units that are coming out of the ground in downtown Miami, it’s actually a third of what we had  in the heyday of the market, where product was being built with only 10-, 15-percent deposits versus today, where the vast majority of those units being built are sold, and most of them have very significant deposits tied to them. In fact, as we start to see those new construction buildings close, all of the buyers are closing, and those that were hoping to capitalize on a kind of vulture-style approach to buying have been left empty-handed. The downtown market is actually poised for a stable quarter.

My personal feeling is that as we get through the summer – and I believe there’ll be significant activity over the summer as a result of instability in Europe – we’ll start to see a lot more interest from the foreign markets. And then what will happen, as we’re moving towards the third and fourth quarters, is you’ll find that those who were hoping for an implosion in the market will realize there isn’t going to be one. Then they’ll make their moves to either buy second homes, investment properties or relocate. Furthermore, I can tell you that some of the financial pressure that the states are feeling – especially in the northeast – whether it’s because of transfer of wealth or other significant financial obligations those states face with respect to their pension plans – are going to continue. And I think that South Florida is going to reap the benefits. Miami has really transformed into a major metropolitan epicenter offering lifestyle, culture, education and medical care. We are going to continue to see tremendous growth in South Florida. And ultimately, I believe the concept of boom and bust that has plagued South Florida for at least the last 20 years has become a notion of the past. We have become a real metropolitan market that will continue to sustain its growth.

JP: I mean, it’s that type of concern that is driving wealth out of those markets now. I think that a good history lesson, as it relates to that, is looking at Russia. We saw that economy implode, but more and more I hear that anyone of ultra-high net worth either moved their money out before or formed an alliance with their government to protect their money domestically. But I don’t think that any government is going to block the movement of funds. And I can tell you that Brazil has always tried to limit the amount of money that was moved out of the country, and yet notwithstanding those restrictions, Brazil has made a significant dent in our market. The more that legislators try to limit the transfer of funds, the quicker and more aggressively high-net worth individuals are moving their funds out. So, it’s obvious anything that impacts foreign investment in the United States is a negative for us, and something I hope doesn’t happen. But it’s very challenging, and I think that’s why a lot of high-net worth people in those foreign markets move their money out ahead of time.